Please read at the bottom for newest information in our investigation and our question about Bremsstrahlung radiation.

Hypothesis: If we attach X-ray films to different cell phones, then we will be able to measure the amount of X-ray radiation they emit.

Our results, as shown in the viewing box, show that instead of a dark film with a clear outline of a paperclip, the results we would have gotten if there had been X-ray radiation, we got mostly clear films with a dark outline of a paperclip. In our findings, we had significantly darker outlines with iPhones than with any other types of phones. We found that “smart” phones had darker outlines than older phones, in our case the iPhone 4 was darker than the iPhone 4S, but they were both the darkest phones. This means that the cell phone would emit microwaves, which would then hit the paperclip, turning them into X-rays, similar to when you put metal in a microwave oven, it makes sparks, those sparks contain X-ray radiation. This formed the outline of the paperclip which was not visible on the one Nokia which had the paperclip fall off its film.  From these results we can conclude that although cell phones do not emit X-ray radiation, they can create X-ray radiation when there is metal such as paperclips or perhaps earrings in the surrounding area. 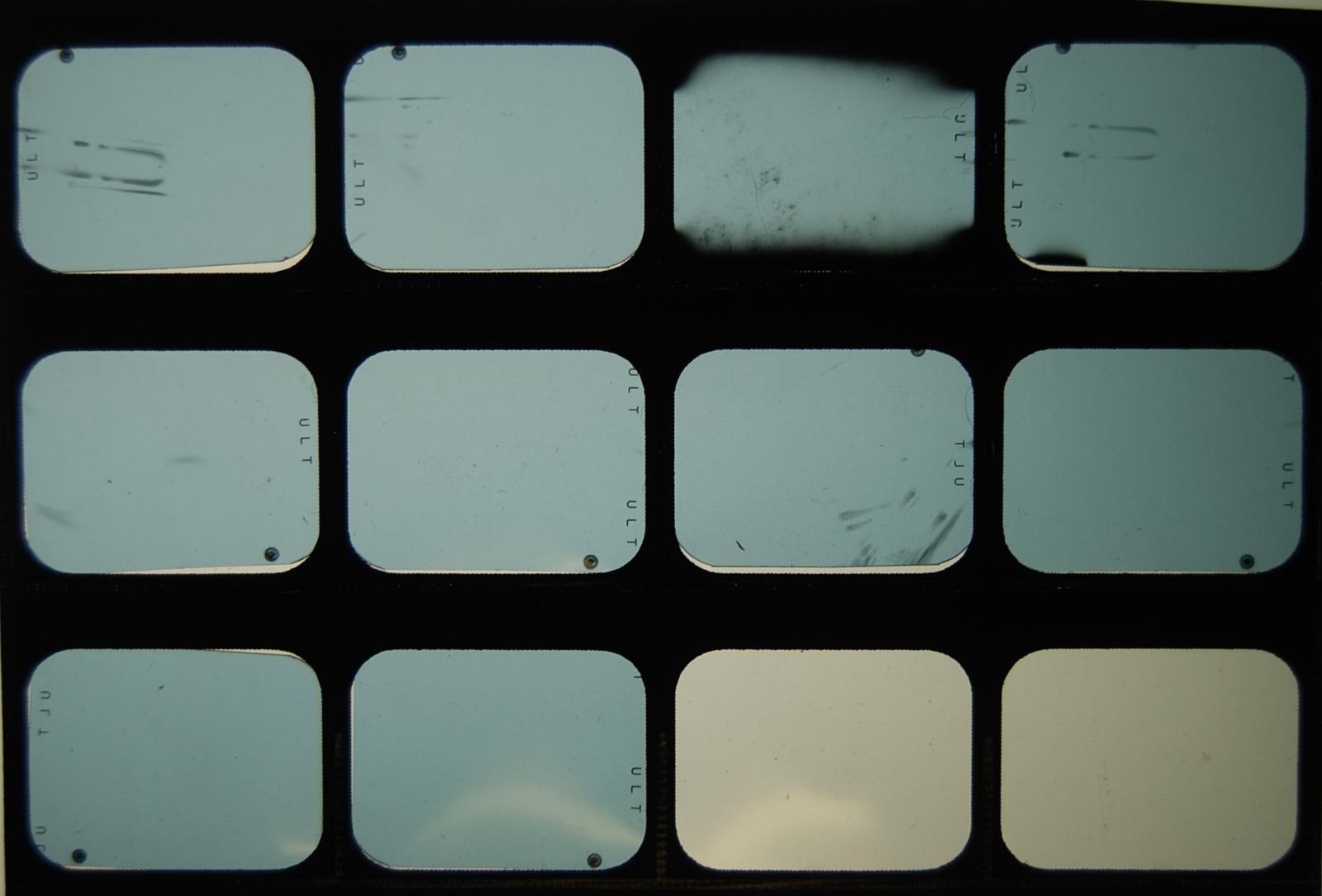 Everyone: Welcome to Rad Radiation!

During this month, we used our cell phones as much as we would usually use it.  After the month was over, we took the films off and took them to a local dentist to be developed.   After they were developed, we put them on a special viewing box which you can see right here.  Where it was dark, that was where radiation was given off.  Where it was clear, that was where it was not exposed to radiation.   On all of the films, it was only dark where the paperclip had been.

After we held them up to a light, to look at them, we exposed a series of X-ray films with different amounts of radiation.  We exposed them for: 0.02, 0.06, 0.10, and 0.16 seconds, with a digital X-Ray machine….  We did this because we wanted to see if we could measure the amount of radiation that the cell phones gave off.  Before we exposed them, we placed a paperclip on each of those films.  We found that the microwave radiation, the radiation from the phones, was bouncing off the paperclips, and turning into X-ray radiation.  That is what made the shadow of the paperclip on the film.   This can also occur with any other metal on your body such as: earrings, glasses, zippers on pants, and belt buckles.

Thank you for listening and we will now take any questions you may have.

US: So, if we put a paper clip on the X-Ray film, we would be able to see the part of the

X-Ray that wasn’t affected by the radiation?

MT: Yes, it would block the radiation.

US: How would we monitor the amount of radiation?

MT: Ah, an excellent question! After you’re done, we would develop the film. And then, we will take more films and hit them with increasing amounts of radiation.  Then each one will be a little darker. We will then compare the X-Ray films we used in your experiment to this new gray scale of films with known exposures.

US: So, you said before that we would have to have many types of phones, but if Sarah’s mom and Jennifer’s mom have the same phone, wouldn’t we get the same results?

MT: Interesting question, isn’t it? You probably would get the same results, but it’s an experiment, so you would have to try it.

US: When we put the X-ray films on the phones, would it matter which way we put them on?

MT: Yes, it does matter. You need to have the side that says “opposite side toward tube” away from the phone.

US: Does it matter if we put the film vertical or horizontal.

MT: No, it doesn’t matter

US: To eliminate variables, should we put the films on at the exact same time?

MT: A great question; Inside each of those packets is a plastic film. Each film has a special coating on it. The coating is sensitive to X-ray radiation. When X-rays touch it, they expose the film and it turns that area black when it’s developed. Wherever the radiation doesn’t touch it, it stays clear.

US: Then how do you see the tooth on the X-ray?

MT: That’s a good question; The tooth in front of the X-ray radiation blocks the radiation.  The denser the tooth, the more X-rays get blocked, and the lighter the film is in that area.

US: Would that be the effect with the paperclip?

MT: Yes, in theory, X-rays from the phone will expose or darken the film everywhere except where the paperclip blocks it.

US: What kind of radiation do cell phones give off?

US: Thank you, Dr. Teitelbaum. 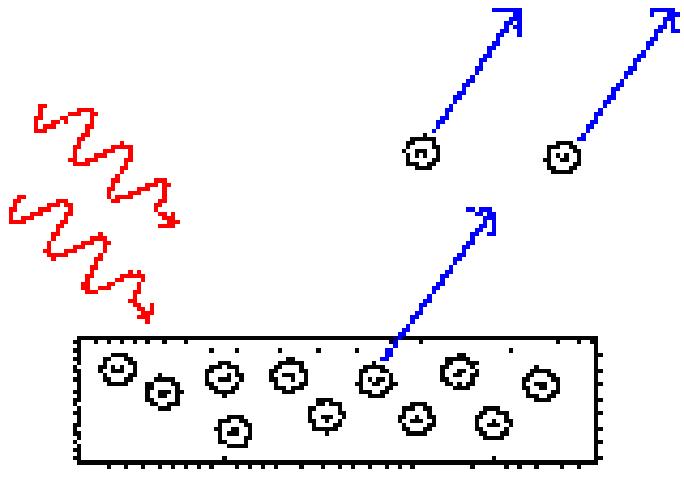 The photoelectric effect occurs when matter emits electrons upon absorbing electromagnetic radiation, such as light.

For background on how X-rays work, click on this link: 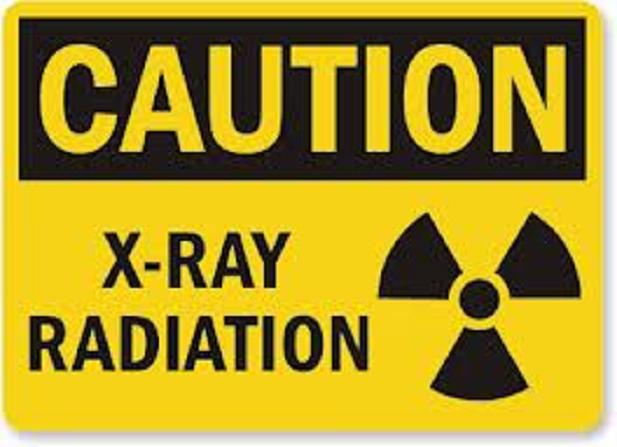 This is a potential, yet previously unknown radiation hazard that we need help explaining for the public & my school science fair. I wanted to test to see if cell phones emit X-rays, and found that if I took a dental X-Ray film packet, put a paperclip on it, and taped it to a cell phone (or 6 different cell phones, as the case may be) for a month, rather than get a black film with a clear outline of a paperclip - which you get when you expose a film to X-rays - we got a clear film but with a dark outline of the paperclip (see above) meaning the metal was somehow causing X-rays to be formed, and this probably affects anyone using a cell phone next to an *earring.* After a lot of reading, I figured that since cellphones use microwaves (about 1.8 GHz), it was like putting a metal fork into a microwave oven, where the sparks contain X-rays.  Unfortunately, the microwave energy may not be enough to exceed the work function of zinc/steel to eject enough electrons in the form of X-rays to make a faint image build up over a month. My data showing how much exposure each film got, along with pictures of the films is above

Thank you very much in advance for your help.

We've actually done many follow up experiments, and some at the same time.  For example, at the same time, using paperclips from the same batch and X-ray films from the same batch, with the paperclip clipped onto (over, around) the film packet (which has a sheet of lead on one side, which we placed opposite the cell phone side, so it would have blocked X-rays coming from the outside, only allowing in X-rays from the phone side) we taped a film to our cordless home phone (uses radio waves, not microwaves); our TV; and put one in a sock draw. Those 3 films all came out blank (controls). Similarly, trying to eliminate other variables, we put a film packet in a baby-wipe warmer to simulate the heat of a cell phone, and we hooked one up with a low level DC electric current running through the paperclip (and left it in the fireplace for a month, just in case) - both of those also came out blank. Also, since the films on the cell phones came out blank except for where the paperclip was, they acted as their own controls, showing that the phone alone didn't cause X-rays, but only where the metal was. Interestingly, on the chance that the microwaves were experiencing some kind of acceleration around the curves of the paperclip, We cut the curved parts off a paperclip, leaving just a straight wire (all from the same batch) and taped that to a film packet and cell phone for a month - that film came out blank except for 2 black dots that corresponded to the ends of the paperclip. Black indicates exposure to X-rays, whereas blank or clear means no exposure.  We did not polish the ends of the paperclip, so the irregularity might have something to do with it.  Is it possible that the paperclip electrons store the microwave energy, keep rising in levels then finally escape as X-rays when they build up enough energy? It seems to me that if this were the photoelectric effect (which doesn't seems likely given low power microwaves shouldn't be able to step up to X-rays, but then again, it was over an entire month...), E = h v, and the X-ray machine is set at 70KeV, which equals 70 eV at the paperclip, so

which would not put it in the range of Xrays

We will be anxious to find out what you think. Are there any other experiments she could try to solve this mystery of what's causing the X-rays? Bear in mind, we borrowed a digital X-ray detector, and with just a cell phone it didn't register anything, but when it rang, with either a paperclip or a piece of gold on it, it registered X-rays.

Also, we are extremely curious as to whether these X-rays could be coming from Bremsstrahlung radiation and if so, how we could test to prove it.

Again, thank you very much.

Send Us an Email

Find us on the map